Apple is often very good at leaving clues about the future. The clue I find the most interesting is what Tim Cook said with the introduction of the A7 processor, and Apple has repeated many times since: “it’s really a desktop class CPU”. And with the iPad Air 2 I must admit, I’m using it much like I would a desktop - and I’ve added a keyboard for it: 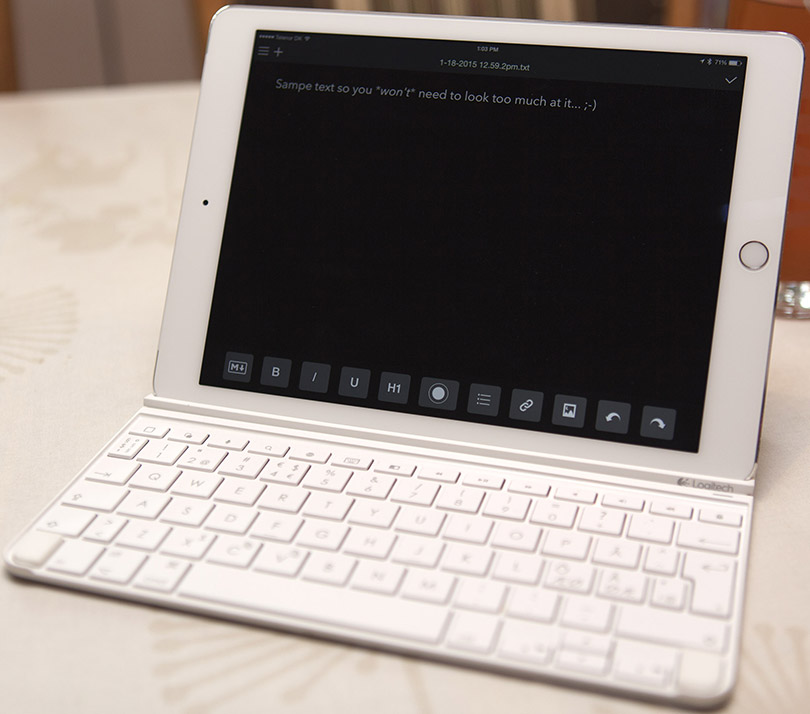 Of course, with Apple you have to sort in what comments to lay weight to. The last reference I’ve found to a touchscreen Mac is from october 2014 where Craig Federighi said “We don’t think it’s the right interface, honestly, […] Mac is sort of a sit-down experience.”. Since I at the same time kept unconsiously touching my desktop screen and my laptop screen, my reactions tell me that this is no longer true.

Right now, the rumour mills are full of speculations around devices with a 12” screen, both a 12” Macbook Air and a 12” iPad Pro have been predicted. I really think these are the same device. Apple has at times made two identically sized but still different screens, but they usually don’t. The iPad version of iOS is honestly not as well adapted for its interface as the iPhone version, so I think making a 12” version of iOS that isn’t just a scale-up version, would be stretching already thinly stretched resources too much.

I also don’t think Apple would just scale up a larger interface: Apple has already shown this by giving developers an iPad simulator with a resizable width and height. Resizing would make sense if it was used for having two apps run side-by-side on iOS. It would also make sense if iOS apps were running in a window on OS X.

By going the route of a 12” touch screen display for the next Macbook Air, and adding an A-series chip such as the A8 into the Macbook in addition to the expected Intel chip, Apple could let any iOS apps run on the Mac, without emulation. It’s not like they haven’t done it before: when Apple was switching to the PowerPC I was told (by my neighbour at the time) it would be able to run both Windows (3.x) and Motorola Mac applications. We’ve also had the two OS’es in one Mac situation with Rosetta, allowing Mac OS 9 to run together with OS X.

In material costs, Tech insights estimated that the A8 processor cost $37 at the time of the iPhone 6 launch, a small extra hardware price for a spectacular integration point.

The motivation for doing this, apart from great integration opportunities, are to mac the Mac a more interesting platform. All the sudden it has everything you have on iOS! Even more important, it would instantly make the many iOS developers Mac developers!

When I began developing for iOS back in the beta days of iPhoneOS 2.0, my plan was to use it as a stepping stone to build Mac apps. I still haven’t released a single Mac app, having only made a few to help me automate my build processes. I am sure I am not the only developer in this boat, and I know of many developers that have complained about the AppKit framework missing features UIKit developers take for granted.

To add to the argument, Apple released size classes for iOS that help us, together with AutoLayout, span the range from 3.5” to 10” devices. With the Apple Watch I expect it’ll bring us down to 1,25”: could that be a key to span up to 27”? At least beginning with 12” as an incremental step would not seem unreasonable.

An argument against, of course, is that the examples of using AutoLayout and size classes to span the existing range in a manner that feels optimized for each screen size are far between. How do you design a responsive UI anyway? The web guys tell us they have been doing it for ages, yet I have not seen anything that meets my criteria above: “feels optimized for each screen size”.

The second argument against, is Android. It has also been able to be make responsive UIs for a long time, and also there I can’t think of an example that meets my criteria above. And, I’ve been able to run Android and apps based on that on my Mac for a while now, and I can’t say that I’ve really taken good use of that.

The scary part of the scenario, is of course the consequence for Mac Apps. The iOS apps would probably all be vended through the iOS App Store, with it’s 30% cut to Apple and low prices. If the Mac App Store was joined together with it, it would probably impact the pricing on Mac apps, instead of what many developers are trying for - bringing Mac style pricing over to iOS.

So that is my speculation for the 12” Macbook Air / 12” iPad Pro/Plus. I’d love to hear your thoughts, and I’m looking forward to seeing how well this matches what Apple will actually bring this spring.