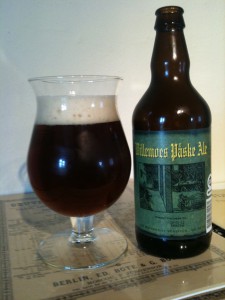 I’m a big fan of Willemoes which is Coop’s brand by Bryggeriet Vestfyen, so when they had an offer too choose three for a reasonable price, I got two of Willemoes Påske Ale and a Påskebryg that will be reviewed another day.

Willemoes is funny as it’s called after Peter Willemoes, a Danish naval hero who captured Nelson and his ship in the war with England in 1801.

As with so many of Willemoes beers, this was an instant hit. It is nice and dark, but transparent. Its nicely filled with spice, it’s sweet yet still fresh, and has a moderate amount of gas, yet very little foam. As with Ørbæk’s Påskeale, it could just as well be a christmas ale, and works fine by itself. It goes well with food as well, especially heavy food. Only negative is that it has a hint of metal taste. All in all I think it’s a good alternative to for instance a Leffe Brune 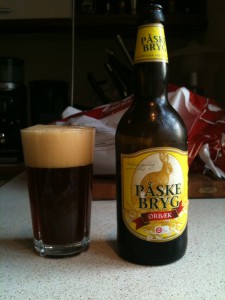 Påskebryg by Ørbæk bryggeri was an instant hit. It has quite a strong taste, with a surprisingly lack of after-taste. It has a very nice foam, has lots of spice and hop, and is moderately sweet.

In color its dark, and you can’t see trough the glass, it’s too misty / unfiltered for that. It has an average amount of gas, and will go well with most kinds of food. This beer is an excellent replacement for a good glass of wine, and can be had by itself. Only weird thing is that if you served this to me as a christmas beer, in my ignorance I wouldn’t know better than to call it an excellent christmas beer as well.

All in all, a great beer that I’ll definitely have another of. And many bonus points for the nice hare on the label 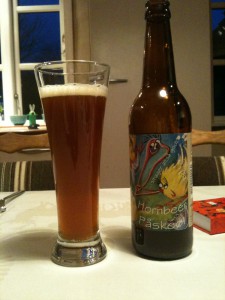 While many of the other easter ales actually could be great christmas beers as well, the Hornbeer Påskeøl is all flowers and “yellow” in taste, a very fine easter ale. It is a bit darker than a classic, cloudy with a nice white foam. The first taste is of spice and flowers, but not heavy at all. Very fitting for spring and easter.

This beer works probably best with food. I was drinking it slowly, and while it’s getting warmer it looses its gas fairly quickly, so while this is no problem with many easter ales, you should probably drink this one fairly quick.

The etiquette is probably the best part of this beer, it’s great! Made by Gunhild Rasmussen, who makes most of the labels, called “everything has an end”. 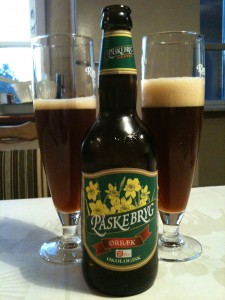 Next up is an ecological beer from Ørbæk.

The first thought was that this beer aspires to be a trapist, yet isn’t as rich in the flavour. It has a pleasant darkness (I prefer dark beer), is well balanced, nice foam and it goes well with cheese (we tried that) and chocolate. It could have a bit more notes of flower and spice, it’s easter ale after all, but I get the impression this is a beer I wouldn’t mind serving guests all year around, perhaps except for christmas.

On a minus note, it has a faint metallic smell, but apart from that, this is a beer I can fully recommend, and I’ll be sure to buy a few more of. I should add that the hints of coffee were a nice plus. The label is nice, but I believe that previous years they used to have an easter bunny. In short: go bunnies!

I’m “imported” to Denmark, and guess what: so is the Danish easter ale tradition. As far as I’ve understood, the tradition started at the end of the 19th century when a few pubs in Copenhagen around easter would import double-bock beer called Salvator from the German order of Paulaner. This was a beer the monks had been allowed to sell since the 1780s. Whether it was actually the beer of the Paulaner monks is somewhat of a mystery, as this brand was so strong that all the Bavarian stouts were simply called Paulaner Salvator. Serving these beers turned out to be a huge success, so in 1905, Carlsberg, the big Danish beer brewery would make their own easter ale and sell it on tap. The year after, Tuborg, their arch rival, followed with their own easter ale on tap.